In this article, you will learn a lot about the Lab map. Namely, where to find the best loot on the map, whether it is worth going there alone, and we will tell everything about each room.

Laboratory Map in Escape from Tarkov

Very secret underground installation Laboratory, built near the city of Tarkov. No one would have known about her if it had not been for the terrible conflict that occurred in the EFT. The laboratory was created both for the evacuation of personnel and the area for conducting terrible experiments on people. The experiments were carried out in biological, biotechnological, physical, chemical and high-tech fields, and because of this, some rooms resemble torture chambers, which were certainly prohibited by law. Experiments of biological agents on living people were carried out in a test room, but could be carried out in any other room. The laboratory is a very creepy place, so you should prepare yourself and try very hard not to hate the Terra Group corporation, which could allow such terrible things. Speaking of raids on this map, they last 45 minutes, and include from 6 to 10 people, as well as several Scav Raider spawns, some of which can be called up by the players themselves, by pressing buttons, and extraction points.

You can expect the best loot from a regular raid to the laboratory, because some places will be littered with a huge amount of very valuable junk. But at the same time, be especially careful, because saving your loot on this card does not work, which means that if you die, you will lose everything and you will not be able to return it. Do not dare to go there without a detachment, this will mean certain death.

You will certainly be attracted to exciting and dangerous places of this dungeon, such as laboratory areas, abandoned parking lots, highly protected arsenal premises, offices, and also test rooms. Now let's finally go through the most interesting locations, with, of course, explanations of a possible loot.

Let's look at the rest room, security service and the laboratory. Also take a look at the security post. You simply can't find the best place to get imba loot, but for this you need keys that are different in color. Security offices will contain such things as the best weapons, ammunition, weapons modifications. And if you need medicines, then here you can also find them. In order to get all this, you will need keys that are not cheap at all, but very easily paid for with such a beautiful loot. The keys come in different colors, namely (red, purple, yellow and black).

Loot what you can get here:

Medicines, MP7 weapons on the table, PC unit under the table, weapons (gentle red key): antiques, various weapons, weapon mods, ammunition. And all this lies in the security office.

Laboratory Manager's Office Located in the center of the Terra Group Laboratory, the Lab Manager's office is located in most of the Laboratory's main working areas. Going there be careful, because you become clearly visible from each main corridor of the second level, or you can easily shoot another player who does not know about it. An office becomes even more dangerous if Scav Raiders spawn, because they cling to your head and kill you in seconds. You can get into this area only with the key of the manager's office [Lk.MO] (it appears in the laboratory in room O13 on the illuminated table).

Possible loot: PC Block, Drawer, rare items, and a weapon box. The green key will be in the manager's office.

It is designed as a regular dining room with tables and food warmers. Facing the reception laboratory. It used to be a place where workers could relax and have a tasty meal.

Loot: Here you can find different provisions, and a yellow key that appears centered on the table.

A laboratory created for sterile work, and conducting experiments such as biotechnological, microbiological and cell experiments. Filled with laminar chambers (workstations designed for sterile work), pipettes, centrifugal separators, incubators and microscopes. A sterile laboratory unit is a good place to look for medical supplies or injections.

It's certainly not a huge room with a small computer, a seating area, tables and a kitchen. It was operated by technical IT specialists of the laboratory. Looking in the back of the room, you can find a staircase that will lead you to the laboratory warehouse (B11) (by the way it will be a good place to hide and heal, it will also give you a chance of a quick escape route. You can also quickly go to the northern room (B12) from the corridor that leads to this place.

A quarantine hermetically sealed area was equipped for a high-quality hospital ward, in which infectious biological agents (bacteria, prions and viruses) were tested on living people (but this could not be so, since this is just an ordinary infirmary in which sick laboratory workers received treatment, but much more interesting is the option that this is a Terra Group conspiracy). A blue card with a key is needed to enter the quarantine zone (appears in Shoreline Sanatorium, office 112, office 104 and inside the ambulance parked in front of the Resort.

Laboratory facilities and the office of the second level.

Here, a huge part of the data obtained during the experiments that took place in the laboratory was studied and processed. The rooms are filled with several computer workstations, shelves for documents, and other office items (you can confuse these two rooms because of the great similarity, so it's worth taking a closer look and playing the game "find 5 differences"). Also on the shelves may be objects that belonged to laboratory workers.

Loot: PC blocks, lots of rare loot on shelves, safe. In Office 022, you can find the black key on the desk, and you can also find the Lab.Key Manager Office.

The room can be easily confused, because it is very similar to other office premises of the laboratory, but a recreation area and a pool table with ottomans will help distinguish it from other possible options. In addition to the recreation area, the room is very similar to offices 023 and 022 on the second level. On old and dusty shelves, objects can still be stored, which once upon a time was useful to laboratory workers or people who came to business negotiations.

Loot: weapons, loot on the shelves and Lab.Key Manager Office, and PC blocks.

A creepy and goosebumping area inside the Terra Group lab. The test room is full of various laboratory equipment and shelves located against the walls, but the most interesting and exciting is in the center. In the middle of the room is a glazed chamber in which there is one hospital bed. By the bloody handprint on the window and the door, one can understand that the person who was inside was tortured, and he did not really like what was happening to him. Although the purpose of the quarantine zone can be endlessly discussed, this room was certainly intended for experiments in which deadly and biologically infectious substances took part. To get to this place, you will need a black key (it appears in the sterile laboratory block (G22) at the second level of the laboratory).

Loot: A honey bag, and various medicines on the shelves.

The simplest and most common university lecture hall. Once upon a time, scientific conferences were held here aimed at presenting the latest experimental results and achievements made in the laboratory. At the moment, it is empty, and all that is lying and gathering dust is old laptops, audio-video equipment, and other things that remained after the last not very interesting lecture.

Loot: UHF RFID Reader, weapons and some loot on the audience tables.

Here, visitors expected lectures, interviews, and receptions by laboratory workers. Everything was done very nicely, live plants and flowers in pots tell us this. But all this is not in the main working area. Reception does not give us too much shelter, so do not linger in this room for too long and beware of the nearby Scav Raider. The first and second floor can be easily reached through the reception.

Open area and the main working area of the laboratory.

As the name implies, laboratory workers conducted most of the experiments here. Everything is filled with jobs, scientific equipment, computers, chemicals, dock shelves and high-tech devices. I call it "Open Area", but there is a lot of it covered (but don't think to rely on the dividers of the wood layer between workstations, they won't stop the bullet anyway). Searchers of prey will find it here a lot, even more than you can carry. Also, this place continues to be interesting, and contains a closed area for testing weapons, for which you need a key. He appears in room R15 on a stool and on the kitchen table in the room above server number 5. There are several weapon racks and training targets in the test site itself, so you can work out.

In this article, we sorted out each room and explained what a terrible place the laboratory is. Human experiments, bloody handprints on the walls, an oppressive atmosphere and a constant sense of danger behind each wall. Horror fans should definitely enjoy this place. We also told where and how to get confused, how to find keys in Escape from Tarkov laboratory, and how to enter and exit alive from this terrible place. Have a good raid, and do not get hit by bullets in this terrible location. And remember - it's better to be careful and get out of this terrible laboratory than to be foolish and stay there forever. #interesting #HD 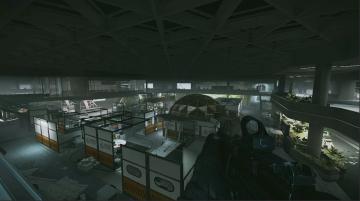