How to build a database in Slash of Slans correctly.

In Clash of Clans, building a base is one of the main mechanics. Protection is the main priority, if you don't want to constantly RAID with robberies.

Why build in Slash of Slans.

Indeed, in Clash of Clans, you can build something simple, but there are two snags:

The simplest thing that can be highlighted is that up to level 7 of the technical level (town hall), it is better to build protection around resource stores, and put them at a distance. Thus, the loss of gold and elixir is minimized, and the destroyed town hall will give a temporary shield and drop the cups, thereby protecting you from stronger opponents. Cups can be restored later by attacking yourself. For kV already the town hall is better to put in the center and enclose everything with a fence, traps and protection, because in war every star counts. We'll discuss the stars later. The fence is easier to make up in the form of several symmetrical shapes and put a couple of bombs and a gun there. The mortar, thanks to the blind zone, put in next to the town hall (in the center) and encircle with springs, bombs and other toys.

What they get stars for when attacking.

When attacking, you can get up to 3 stars. They are a kind of coolness indicator. The more stars, the more rating points and resources you will get at the end of the attack. If you were attacked and the attacker received at least 1 star, then you will be given a shield against attacks for a while.

How to build after 7 th in Clash of Clans.

And now at the 7th level of the town hall, you can build something more interesting. To do this, figure out how it is easier for you to play. If desired, you can continue to build the base from the edge further because it is much easier to develop. But if you want to crush the enemy, bring him to his knees and listen to the lamentations of the inhabitants of his village. Then you can already build a base with the technical characteristics in the center. For example: here, as you can see, the pickers, huts, and so on stand outside the fence line. And the defense is centered around the town hall.

The construction of bases in Clash of clans is implemented is interesting. Everyone, from rating fans to players who want to see all the buildings, will find something different here. #interesting #clashofclans 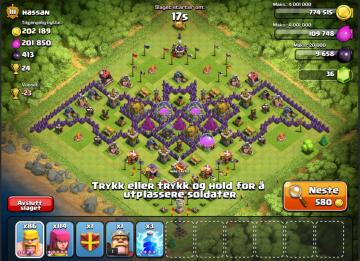