Escape from Tarkov is an indie, massively multiplayer online (MMO), first-person shooter (FPS) video game being developed by the Russian studio Battlestate Games to be released on Windows. It is set in the fictional Norvinsk region in Northwestern Russia, where a war is taking place between two private military companies (United Security and BEAR) over a political scandal regarding the area's "special economic zone". The player is tasked with escaping the city of Tarkov by either joining one of the private military companies or by trying to acquire precious loot from the sealed areas.

A closed alpha of the game was first made available to select users on August 4, 2016, followed by a closed beta in July 2017.

Gameplay The developers of Escape from Tarkov refer the game as a realistic and hardcore first-person shooter role-playing video game that borrows elements from massively multiplayer online games. In its current state, Escape from Tarkov incorporates several modes for the players to play: online PMC raids, scav raids (short for "scavenger"), and a temporary offline mode. In these raids, players can choose to play solo or go in groups and spawn on one side of a variety of maps to choose from in the game. Once spawned in, the players are given an extraction point on the other side of the map, and must fight against other players and scav non-player characters (NPC) to reach that point in order to escape. In addition to combat, players can also find loot in these maps such as firearms, equipment, armor, etc. and once extracted, can store their loot in a stash to use in future raids or can be sold in a flea market.

When players die in a raid, they lose everything, including loot and the equipment they brought into the raid. Players can insure weapons and equipment they brought in to increase the chances of getting the gear back if the gear is not taken by other players. As mentioned before, players can also play as a scav in a raid, where players are given a random loadout to use and do not lose anything from their stash when they die as a scav, making scav modes a learning source in the game. If a player dies as a scav, there is a cooldown timer until the scav mode becomes available again for the player.

While not in a raid, players can sell their loot to traders that are provided by the game. These traders can provide a variety of quests that players can fulfill to increase their trader loyalty to get access to more items that can be purchased from the trader and more quests as well. Players can also settle and upgrade a living area called "the Hideout," which is an underground bomb shelter that once upgraded with the materials needed, give the players in-game bonuses. These bonuses include reducing the cooldown timer to play as a scav.

Combat Escape from Tarkov has combat that could be described as hardcore and realistic. The player has potential access to a variety of weapons, varying between assault rifles, DMRs, light machine guns, and almost everything in between. All of these weapons, adjacent to other shooter games, are effective at various ranges dependent upon several variables like player position and distance from the enemy. Weapon effectiveness and functionality are heavily dependent upon the attachments and mods that the player installs on the weapon, such as sights and barrel attachments. The major difference between the combat in Escape from Tarkov and other FPS games is how damage is dealt.

Instead of a standard health bar, players take damage to different areas and limbs of the body. Depending on the weapon type and the damage dealt, various status effects can be applied to a player's limbs that drastically affect how the PC moves and functions, such as fractures and bleeding. Damage can be effectively avoided depending on player movement and gear. Body armor can protect certain areas of the body and leaning mechanics can allow a player to reduce their visible hitbox to the enemy. However, to counter this players may equip armour piercing ammunition of various grades and calibers, while one may also wear heavier and heavier armour. Currently, the armour system is somewhat rudimentary, with the entire armour set being treated as the same protection level, but improvements such as modular armour plates and soft inserts, are planned.

Observers find Escape from Tarkov's hardcore combat to be similar to that of Bohemia Interactive's ARMA.

Setting Escape from Tarkov is set in the fictional city of Tarkov, the capital of the Norvinsk Special Economic Zone in Northwestern Russia between the year 2015 and 2026. Political scandals and collapse of corruptions have resulted in the social breakdown of Tarkov and warring factions have turned the city into a shell of itself with sections of the city being under control of aggressive locals called "scavs." As of March 2020, players can play across seven of the game's playable locations all within Tarkov: Factory, Customs, Woods, Shoreline, Interchange, The Lab, and Reserve. Streets of Tarkov as of March 2020 is a location under development and is planned to become the next playable location in the game. There would be a free-roam option in the game that would combine all the locations into one, giving an open-world experience for players in Escape from Tarkov.

Factions There are two PMC factions for players to choose in the game: United Security (USEC), a Western-based company hired by a corporation known as TerraGroup to cover up the company's illegal activities and BEAR, a company created by the Russian government to investigate these activities. It is planned that each faction would have its own gameplay advantages as well as unique cosmetics. For example, USEC-based players would specialize in Western or NATO-based firearms and light armor while BEAR-players would specialize in Russian firearms and heavy armor.

Another faction that is also playable as well as functioning as a NPC faction is the Scavs, which are aggressive locals of Tarkov that are hostile to both BEAR and USEC. There are Scav Raiders and Scav Bosses, which are both NPCs that have better equipment than normal Scavs, with the latter having a different artificial intelligence behavior and each specializing in a specific location in Tarkov.

Development Escape from Tarkov began development in 2012. Battlestate Games lead developer Nikita Buyanov stated that he and the staff gained their experience through working at Absolutsoft on their previous work Contract Wars. Both Escape from Tarkov and Contract Wars are set in what the developers refer to as the Russia-2028 universe. Buyanov stated that some of his staff also had experience from real-world military experience, with one of them being a former Spetsnaz operator.

Release Developers stated that Escape from Tarkov would be a traditional full purchase release without any free-to-play or microtransaction elements. There is a possibility of a release on Steam sometime after the game's official release. There are also plans for downloadable content in the future. The early-access version of the game is released in four editions, with the latter having more equipment and a larger stash for the player to use than the former: Standard Edition, Left Behind Edition, Prepare for Escape Edition, and Edge of Darkness Limited Edition.

Escape from Tarkov was launched as a closed alpha game that was first made available to select users on 4 August 2016. Battlestate Games then announced that the game would go into its extended alpha stage on 28 December 2016, which would available to select users who preordered the game. This is the stage where Battlestate released the game in four preorder tiers, with the Edge of Darkness edition guaranteeing players access to the alpha build. All players who had access were subject to a non-disclosure agreement (NDA) and video coverage of the gameplay via streaming was limited to a few select players until 24 March 2017, when the NDA was lifted.

The game entered closed beta on 28 July 2017, being made available to all players no matter what pre-order edition was bought. As of May 2020, Escape from Tarkov is still currently in its beta stage.

Controversy Battlestate Games has been accused of abusing YouTube's DMCA system to remove negative videos of Escape from Tarkov. YouTube user Eroktic released a video accusing Battlestate Games of leaking user information, resulting in Battlestate Games issuing DMCAs on 47 YouTube videos posted by the user; two of which were striked for allegedly spreading false information and the rest for spreading "negative hype".

In a 2016 interview, an employee working for a game developer Pavel Dyatlov stated that there would be no women or playable female characters in the game because, "... women can't handle that amount of stress. There's only place for hardened men in this place."

In 2020, the developers apologized for the previously expressed views and instead stated the reason for not adding playable female characters is because of "game lore and more importantly, the huge amount of work needed with animations, gear fitting, etc." 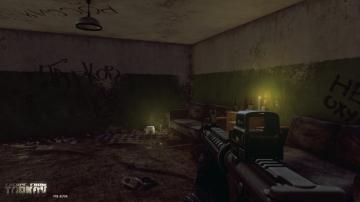