Darkest Dungeon stress and what it is "eaten with»

In this game, a lot depends on stress. Therefore, this indicator should be monitored. Sit back and pour warm tea. I'll tell you everything.What is" stress", why did I decide to consider it, and why is it so important in this game? Elementary, My Dear Watson! Each character in Darkest Dungeon has a parameter - "stress". This is an important component of every creature, because "stress" determines the mental state of the characters. With the development or deterioration of indicators, the hero can become a madman or a hero. The choice is yours. The "stress" parameter cannot be magically restored after passing through the underground realm (dungeon).So, how does "stress" affect the trait of your chosen character? The "stress" indicator can either decrease or increase. If the reached number reaches 100%, the character gets one of the previously mentioned character traits -- heroic or insane. We note that after reaching 200% of the "stress" level of well-being of the character quickly rushes to zero, that is, the characters are on the threshold of another world (death).

Let's highlight the main state of the character, referred to in the game as"psychosis". Psychosis is an excess of the hero's "stress" state by 100%. What is the risk of psychosis? The character you play can perform a number of uncontrolled actions. This can and should be corrected. Psychosis is treated in a local clinic (hospital), or we reduce the indicator of "stress" in the hero.We are afraid! (Getting stressed) The hero can "stress" in a number of situations:

Please note that "stress" is removed in the game city:

Developing and analyzing a character gives you insight and sound judgment -- no stress anywhere. What can you do? This way, the game makes you watch the character you choose more closely. We observe and calculate, - the mark of "stress" of the hero should not exceed the mark above 200% (especially during the battle). Here are the main methods:

I hope that this article helped you understand the gameplay features in the game Darkest Dungeon. Less stress and fret, nerve cells and so little -- they need to be protected, because they do not recover. #interesting #hd #darkestdungeon 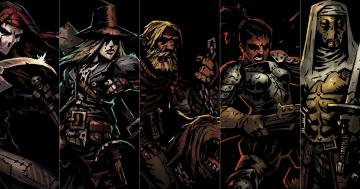