All about chests in Clash Royale

Chests are one of the main components of the game. What is the order of falling chests in clash royale, as well as what will fall legendarka read in our guide.

That there are chests in CR.

We get chests for activities in the game. With them, you will get cards that you will add to the deck or improve other units by using them. Maps are divided into regular, rare, epic, and legendary. In addition, there is a division into buildings, units, spells, armies, and spells.

What is the cycle of chests in Clash Royale.

In the first arena, you will first fall out of wooden chests. Then, starting from the second caskets are dropped in this order: silver and gold, and the hundredth chest will be either magical, huge, super-magical, or legendary. The cycle here, as with the reapers, always continues and repeats.

What types of chests exist.

Chests in the game are divided into 8 types, here they are:

The list and number of cards depends on the arena, and the order is the same.

Which chests can be obtained for free.

For this, we will get the chests after winning online. Which chest will fall out in clash Royale you have described above.

We will buy the paid ones for the crystals in the store. Here they are:

Sometimes you will be able to purchase the chest for free. And also before buying, you can see the contents of the coveted pack.

What are the free chests?

Free chests are divided into 2 types:

The first type includes two chests: Royal and clan. The first is Packed into a solo, and for the second will have to sweat each of your group.

The second type can include many, here are the simplest:

Opens 10 seconds, we get 1 arena or waiting. Not particularly needed in the future.

One of the rarest chests. They open for a long time, but the jackpot is worth it. Great chance of a legend.

A chest with a selection of cards.

This is one of the purchased chests in which you will choose your loot from the two offered. This will help you collect the desired deck or just pump the necessary cards.

It's all encrypted in the name. The first will give out a legend, and the second an epic. The guarantee there is 100%. You can buy them in the store or get them for quests (more on them later). In addition, the Legendary king's chest is recommended, where there is also a choice.

This can be any of the boxes listed above, but you will get it for completing the dailies.

They open instantly, and you can initially view the contents of the container.

This chest will get, as usual, the winners in tournaments rewards in it depend on the crystals invested in the tournament.

In Clash royale, there are a huge number of chests. And everyone will choose something to their taste. And the game will give you a sense of suspense and uncertainty. #interesting #hd #clashroyal 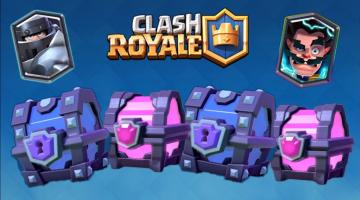