NPD May 2020: Switch and Call of Duty: Modern Warfare best-sellers for the month

The NPD May 2020 report finds Switch once again the best-selling console, and Call of Duty: Modern Warfare returning to the top of the software chart.

The NPD has released its analysis for the month of May 2020, noting a year-over-year increase in both hardware and software.

Call of Duty: Modern Warfare , which was second place in April , returned to the top of the chart as May's best-selling title and remains the best-selling game of 2020 year-to-date.

GTA 5 was the second best-selling title for the month, and Animal Crossing: New Horizons maintained its third-place position followed by NBA 2K20 in fourth.

No new releases ranked among the top ten best-selling games of the month.

Switch was the best-selling console for the month in both unit and dollar sales. Sales of the console was the highest for an individual platform in a May month since 3DS in May 2009.

Spending on accessories and game cards hit $304 million, up 32% yoy.

Gamepads, headsets, headphones, and wheels set new records for the month, and the Xbox Elite Series 2 Wireless Controller was the best-selling accessory for the month.

Overall, May 2020 spending across hardware, software, accessories, and game cards totaled $977 million, a figure which is up 52% yoy. Year-to-date, spending across all sectors hit $5.5 billion, up 18% yoy. 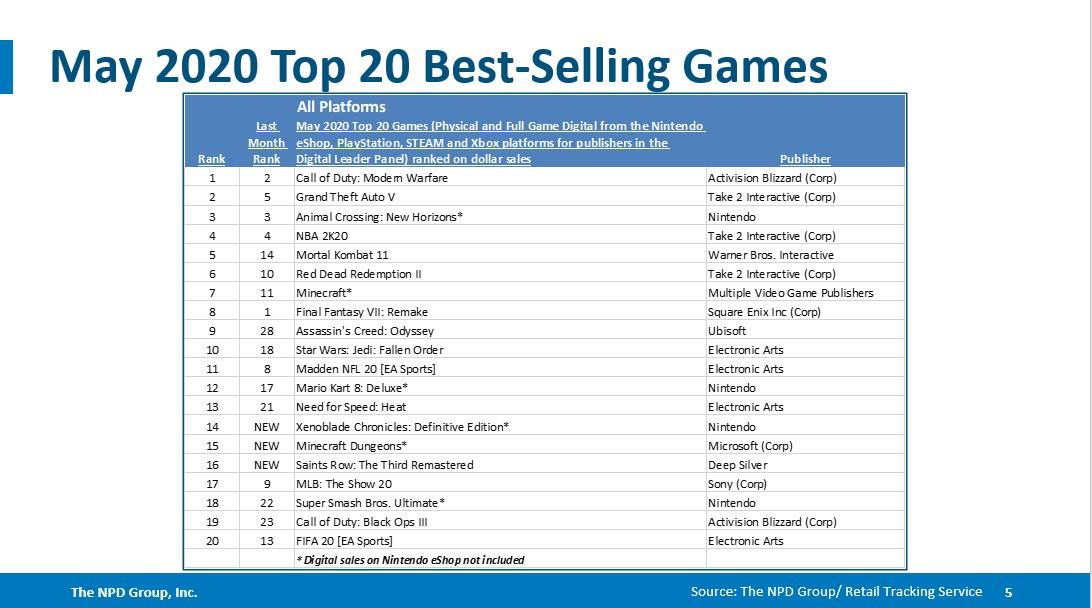