Ghosts in Sims 4. How to make and where to find?

In this article, we will talk about who the ghosts are in the sims 4, how to accept them into the family and how they interact with the world. And also how to possibly resurrect them.

Who are the ghosts in Sims.

Ghosts in the Sims series from Electronic Arts appeared in the very first part and are present in every game to this day. The characteristics of ghosts changed with the development of the series. In the first part, they appeared only if the site is buried human remains. In the second, they varied in color depending on the circumstances of death. In the third, the SIM could remain in a relationship with a partner who had not died by his own death, and only after breaking up with the deceased, he could start a relationship without penalties. You will learn about the ghosts of the fourth part here.

They were not added immediately, but in Sims 4, the spirits turned out to be more diverse than ever. They change color depending on the mood and have unique properties, both as a species and individually. For example, drowned people are afraid of water that drips from them all the time, and also get a negative effect when swimming. The spirits here are truly magnificent, because where else can you marry or marry a Ghost, where else will you be washed by otherworldly forces, where else can you live together with a real friendly Ghost? And more specifically about these creatures is described below.

How do I make a character a Ghost in Sims 4? The answer is quite simple. You must die. From the banal removal of a door in a room to a shipwreck or excessive rage. You can just live your life and die of old age. Died and nothing happened? Put up a tombstone and wait a couple of days. And that's own the dead person in front of you appears a Ghost.

How to add a Ghost to your family.

There are two main ways:

How do ghosts differ from regular Sims? In addition to improved repairs and actions-mischief (pass through a person, take possession of an object and scare), the Ghost has a set of conversational actions related to death: talk about death (communication between ghosts), mourn about a past life (action in front of a tombstone) and ask about death (SIM asks the Ghost), as well as ghosts have special properties related to the cause of their death.

What is the meaning of different circumstances of death and properties of ghosts - the difference is shown in the table:

What do ghosts do in everyday life?

In principle, ghosts in everyday life do not differ much from their more lively counterparts, but they fix appliances more efficiently, and when repairing electronics, they can not die a second time, so whether they work or clean the house is your business. You can also get achievements for certain actions with them.

How to resurrect a Ghost in Sims.

If the advantages of a Ghost do not appeal to you, and you like the character more in the flesh, then there are several ways:

Ghosts in Sims 4 are truly unique and interesting. They get noticeable disadvantages, but compensate for them with pluses in the form of repairs and immortality. Their colors depend on the mood, if you move enough to move the gravestone. Ghosts can accidentally lime the SIM and it is better not to anger them. Whether to use them or not is your decision, someone will be tempted by the advantages, someone on the contrary will not want it. But still save your life in the book or backup or carefully consider your decision and choose the death that is convenient for you. Good luck and don't be afraid of death... #sims4 #simulation #Interesting #HD 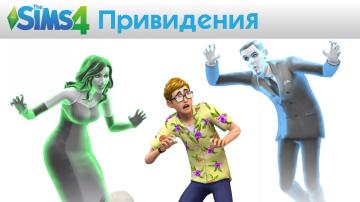