The most unexpected secrets and secrets of GTA 5-Part II

Today we will find out: -Anna Rex - history of the disease - Alien - UFO -Snowman - The secret of mount Chiliad "The Ghost from mount Gordo - Infinity Killer -Access to secret rooms

Everywhere in the city there are ads with cute, but very thin girls who are the symbol of the Anna Rex brand. Of course, this is a direct reference to a serious illness - anorexia, when a person loses weight and can not eat normally. In fact, it's important that Rockstar is not just rofled in their Easter eggs, but also pay attention to serious topics. And they focus our attention on acute problems.

The alien we deserve.

In the "prologue" mission, you need to turn off the road under the railway bridge. And there, right in the ice, you can see a silhouette that looks very much like an alien. It looks creep. But even more interesting is that the game has a magazine "RAMPAGER", which contains a picture from the movie "Alienprober 3" which captures this particular alien.

Looking for UFOs in Rockstars games is already a classic. GTA5 is no exception, there are just a lot of them. To find a UFO, you need to pass the game 100% and now we will figure out where to look: the First location is The zankudo military base. You need to get on a helicopter and go up over the Fort. The second location is the beloved and mysterious chiliad mountain. You need to climb it, preferably at night and just watch the sky. The third location is a hippie camp. It is located near blaine County, But on this plate you can see the inscription FIB, so you can forget about the extraterrestrial origin of the object. By the way, this is the kind of ship that Michael gets into in one of his drug trips. And the fourth location contains a floating object, not a flying one. Or rather, no longer floating. We look at the map, and sail North near the Bay of Paleto. And at the bottom we find a sunken UFO.

A huge snowman is hidden in an industrial area, in one of the warehouses of La Mesa. It is closed by a door and blocked with boxes.

The secret of mount Chiliad

A wonderful place, what on this mountain only there is no. It's just one solid GTA5 mystery. And these Easter eggs are still trying to solve. The fact is that on the top of the mountain near the place where the funicular will arrive, we find a drawing of the mountain. It has several details: a UFO, a Broken egg, a Man with a jetpack. In fact, there is an opinion that this drawing simply tells us that on the mountain you can observe UFOs. But many fans believe that not everything is so simple, because the drawing has so many details. And still do not give up trying to solve the mystery of mount Chiliad to the end. On this mountain, there is another cool reference: Go to the station with the funicular in the North of the mountain. There's a drawing of a man's face waiting for us. And if you look closely, he looks very much like Jesse Pinkman from the TV series "breaking bad". There is no special meaning in this Easter egg, but it is very interesting to find it.

The Ghost from mount Gordo.

We are looking for it strictly from 23: 00 to 00: 00 on the mountain, North of the lighthouse. If you get very close, the Ghost will simply disappear. Along with the Ghost, we can see the inscription Jock. This refers us to San Andreas state Governor John "Jock" Cranley. In the camp under the mountain, you can also hear the screams of a girl. On the Internet, we can find a note about the tragedy and murder, the content of which was: March 15, 1978. The accident with Jock's wife, jolene Cranley-Evans. A walk near the cliff suddenly ended in her death.

When one of the GTA5 players accidentally found a corpse wrapped in cellophane right on the sea floor, the community just exploded in anticipation of solving this mystery. Let's look at the details: And here we can find a ruined house in sandy shores, which is covered with graffiti and the numbers "8". In addition, "8" is also a symbol of infinity. In the house we are waiting for such inscriptions (immediately translated): "There will be 8" in the North of the map there is an archipelago, which is also depicted in the house as a map. And four crossed-out sticks-probably the number of victims. Below the inscription "Go away, Merle Abrahams, you're too suspicious! " And " 8 is just infinity" All these inscriptions were left by the killer, who probably lived in this house. South-East of this house is Senora Park, where the killer also posted his messages: "the first one is finished

If you know a reference to Freddy Krueger, respect you. Then there will be signs that the killer feels that they have already found their trail, they write: "8 will not be" or that the eighth will be the killer himself. Then we will go to the prison and find the inscriptions: "Where the water met the earth and the erupted flames, There 8 must remain infinite. Until I get back." Again, the map of the Islands. Which means we're going there. And here we are waiting for horror, because it is in the archipelago that 7 victims of this maniac are hidden. It's not hard to find them, but sometimes the bodies can blend in with the terrain. Questions remain: who is this killer and what became of him? The answer is that there is a signpost next to an abandoned hotel in sandy shores. The inscription on it says that a certain Merle Abrahams, 57 years old, suspected as the "infinity " killer died in prison while awaiting trial. The police believe that the maniac killed 8 people. Merle himself denies this.

We just need this secret just fun. We find a hole in the textures in the backyard of the police Department in the East of Los Santos. We get under the texture using jumps and find ourselves directly under the map. I advise you to take a parachute with you - when you jump into the abyss, it will be more fun to parry. You can find many locations and rooms that are not available in the normal game. And find out what secrets and secrets are hidden in GTA 5.

This is the time to stop, in the article we have sorted out the most interesting-cool secrets, interesting Easter eggs and references. Discovered a lot of incredible and entertaining secrets of GTA 5. Most likely, the game will not stop surprising us for a long time, and some of the secrets have yet to be revealed to fans. 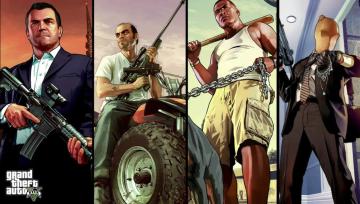