A new battle royale mobile game has made it to the charts. Today, we're covering the new battle royale, HeadHunters io. In this game which is available on Android and iOS, there are tons of cool features including many meelee weapons. These include swords, knives, and axes. There are also many unique characters, multiple game modes, easy, intuitive controls, online, and offline PvP battles.

If you haven't downloaded HeadHunters io yet, check out this gameplay video below.

In HeadHunters io, you get the choice to play as a Knight or Viking. This reminds me of the mechanics in Elvenar. They're also many other skins that are available. The multiple game modes include deathmatch and battle royale. Who doesn't love a battle royale game?

New updates have recently been added, the newest one being the new competitive mode, The League. Win in intense battles in this battle royale game mode, and open new arenas to reach the tournament ladder. 10 new arenas were added as well.

Compared to other io games, I definitely have to say this one is worth the play. These don't feel intrusive and there isn't a pay wall at any point. One reason why I enjoy HeadHunters io is that you have different heroes with different attributes, also weapons. The only thing is that you have to use your brain to survive longer. 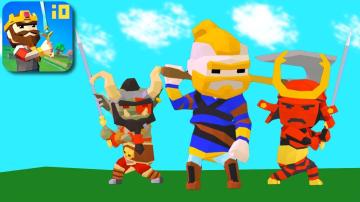