Sega Shiro engages an opponent whose face is hidden behind a mask. The hero fights hard and eventually wins. Sudden turn: it turns out that Sega hatan Shiro is Sega Sansiro, the guy's father and previous mascot SEGA ! "I wanted to make sure that you grew up. Now I see you can protect SEGA >> , "says Sagata.

The father continues to instruct the son --- that, they say, should forget about the parent and protect the new one SEGA independently. "Become better than me, throw me out of your way!" Sagata shouts. Well, SAG and discards. Straight into space.

Suddenly the young man wakes up in the classroom. His father is nowhere to be found. Maybe it was just a dream... But no, Shiro is holding a belt with an inscription embroidered on it: \<\< SEGA --- in your hands >> . At the end of the video, Sega, full of determination, tightens the belt on himself. 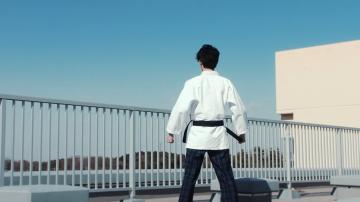