There's some rootin' toontin' first-person shootin' in-store for Borderlands 3 next month, when the game's newly revealed third chunk of story DLC - the Wild-West-inspired Bounty of Blood: A Fistful of Redemption - heads to Xbox One, PS4, and PC on 25th June.

Bounty of Blood - which follows on from previous story campaigns Moxxi's Heist of The Handsome Jackpot and Guns, Love, and Tentacles: The Marriage of Wainwright \& Hammerlock - turns its attention to the desert planet of Gehenna, where Vault Hunters are given the task of tracking down a bandit gang known as The Devil Riders.

These hoodlums have been terrorising the dusty town of Vestige and players can help its denizens restore it to its former glory, as far as that goes, by completing story missions and Crew Challenges. Gearbox promises new characters - including a mysterious unseen narrator and a warrior named Rose, equipped with katana and pistols - alongside gameplay additions. Subscribe to our YouTube channel

On the latter front, players will have the opportunity to navigate the open plains of Gehenna on the new customisable JetBeast hoverbike, which can be fitted with the likes of dual machine guns and mortar weapons. Elsewhere, new interactive elements include the Breezebloom, enabling Vault Hunters to boost up to previously inaccessible areas, and the Traitorweed, which can temporarily turn enemies into friends.

And if it's rewards you're after, there are new Legendary items, Vault Hunter heads, vehicle skins, interactive room decorations, plus a range of Western-themed weaponry too. All this, incidentally, is previewed from the 25-minute mark in Gearbox's latest livestream above. A concept art tease for Borderlands 3's fourth story DLC.

Prior to Bounty of Blood's arrival, all Borderlands 3 players will receive another helping of free content on 4th June. The update will introduce a new "extreme" end-game gauntlet set on the planet of Minos Prime, known as Takedown at the Guardian Breach.

This will feature new enemy encounters (including a mini-boss and final boss), puzzles, as well as low-gravity platforming sections. Gearbox says it will scale to suit parties of all sizes, but is primarily intended to "push a full party of four Vault Hunters to the limit".

As for Borderlands 3's future the developer has shared the briefest of teases for the game's fourth and final story campaign in the form of some colourful concept art. Expect more details, and the lessening of its mystery, as its currently unconfirmed release date draws nearer. 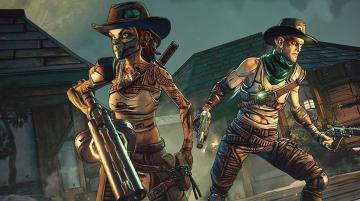