Greymoor doesn't just allow us to see what a baby Western Skyrim looks like, it also brings 30 hours of new content. Not only does it bring a re-vamped vampire skill tree, it also gives us Vampire Lords, a couple of public dungeons, six delves and group bosses, Harrowstorms, ten side objectives, and a trial. There's also a new antiquities system, which could lead you to becoming a world-renowned archaeologist, if you dig your relics right.

What we're all really interested in though is looking at our beloved The Elder Scrolls V: Skyrim versus The Elder Scrolls Online's Greymoor version of Skyrim. The video below shows comparison shots of a iconic Western Skyrim locations versus their counterparts in Greymoor: Solitude , Blackreach , Dragon Bridge , and Morthal.

As you can see, it's a lot less murky than Skyrim, and way more high-definition. There's certainly a lot to love about visiting Skyrim before we remember it, including visiting The Winking Skeever -- Solitude's pub that was known back then as The Lonely Troll.

It's also great to see an expanded Blackreach, plus a bonus new vampire lair made of stalactites. As if there weren't already enough reasons to love Blackreach, like the Chaurus Reapers that inhabit the world below. The noises they make still makes me shudder to this day. But if you forget about all the insects, Falmer, and occasional Dwemer Centurion, it was actually quite a relaxing place to wander around, so it'll be nice to explore it a bit more.

We've also got the first look at this CGI teaser trailer for the expansion -- watch until the end to get a glimpse of something furry... 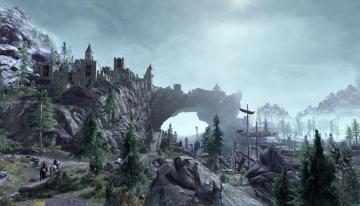