In Mortal Kombat 11, RoboCop enlists the help of ED-209

The video shows one of RoboCop's fatalities, which calls in that good doggy robot ED-209 for some twin mini-gun action. Meanwhile, RoboCop, whose voice and likeness comes from actor Peter Weller, shoots his enemy to bits with the Cobra Assault Cannon, which RoboCop film fans will remember Clarence using to blow up poor Joe's car.

There are some fun nods to the films in the gameplay. We see RoboCop blowing the hand off the Joker - a clear reference to RoboCop's infamous "give the man a hand" torture scene. And what's that? Oh, RoboCop's not targeting there, is he? Oh. He is. Poor Baraka.

RoboCop has a riot shield that looks like it offers a parry, his Fatal Blow sees him stab his enemy through the belly with his hand spike, and he can fly through the air for a bit. And of course NetherRealm shows the Terminator fighting RoboCop, delighting fans of 80s action movies the world over. Subscribe to our YouTube channel

Over on the PlayStation blog, NetherRealm said RoboCop will have both his original RoboCop film grey suit, as well as his bluer RoboCop 2 outfit in the game. RoboCop also gets a NetherRealm Studios version: a Mortal Kombat 3 Cyber Ninja RoboCop variant.

There's a lot more to the video than RoboCop. We see gameplay of new DLC characters Sheeva and Fujin, as well as new stage fatalities, and new stages including the new Dead Pool, Soul Chamber, Kronika's Keep and RetroKade, which are set to hit the game alongside the launch of Aftermath.

For more, check out our Mortal Kombat 11: Aftermath preview. The expansion goes live from 4pm BST on 26th May. 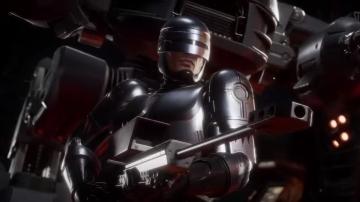