We played Cosmic Encounter and lost our minds

First released all the way back in 1977, Cosmic Encounter is what you get when you blend poker with a sci-fi B-movie, and then use that slurry to play Calvinball. There are lots of mechanics to learn, but like most of the games we play on Overboard (Polygon's card and board game show), it's foremost a social game where the best skill you can have is convincing people you're not a threat. We had a blast playing it in Tabletop Simulator even if it left us more than a little bewildered.

Winning Cosmic Encounter is straightforward: establish five "foreign colonies" by placing your spaceships on at least five of your opponents planets. You accomplish this by having encounters. During one of these encounters you are randomly assigned an opponent to attack. You can ask for some help from the other players (same with the player you're attacking) before settling in for the showdown.

Both you and your opponent place "encounter cards" face down, hoping you have the bigger number on your card. This is where the game feels a bit like poker because more often than not you'll have to bluff your way to victory. Convince the other players you've got a powerful encounter card and you might not have to worry about them allying with your opponent.

Once you reveal your encounter cards, determining a winner is simple: Add the number on the card to the number of ships you and your allies supplied for the attack and the bigger number wins. You can also negotiate, but that's tricky but that's tricky because both players need to reveal negotiate cards. Playing a negotiate card against an attack card results in an automatic loss, so you'd better hope your opponent is telling the truth.

That's the simplest explanation of the game's rules, but it's not what makes it special. The real fun in Cosmic Encounter is all the ways you get to breakthose rules.

For starters, each player in the game is a different alien race. And each alien race has a power that lets them break the rules in some way. Some of these powers are simple, like the ability to steal cards from their opponents' hands or having extra powerful spaceships. But some of these aliens' powers fundamentally alter the way the game is played. For example, The Oracle forces their opponents to play their encounter cards face up while The Grudge can penalize players if they refuse to ally with them.

A few of the alien powers straight up give players an alternative way to win the game.

These alien powers are intentionally not balanced because the game expects the players to keep an overpowered alien in check. Multiple players can win a game of Cosmic Encounter together, which is why convincing everyone you're not a threat is such an important part of playing the game. If you look like you're going to waltz to victory, everyone can and will ally against you.

Players also have a hand of cards that let you do all manner of things. Reinforcement cards can add a few points to your side of the battle after encounter cards are revealed. Artifact cards can disrupt carefully laid plans by temporarily nullifying an alien power or by stopping a negotiation in its tracks. But the most useful (and chaotic) cards are the Flare cards.

Each flare card is based on one of the game's 50 aliens and works like a diet version of that alien's power. Retrieving destroyed spaceships, snatching an opponent's card, or completely changing the math in an encounter are all possible with the right flare card.

Stack up all these alien powers and cards and the game's normal rules quickly dissolve. It makes every game a lively, unexpected series of confrontations and dramatic reversals that feels less like a game of poker and more like an episode of Yu-Gi-Oh.

You can watch this beautifully chaotic mess of a game in the episode of Overboard above. If you enjoy it, be sure to catch all the past episodes of Overboard and the rest of our compelling video content over on our YouTube channel. 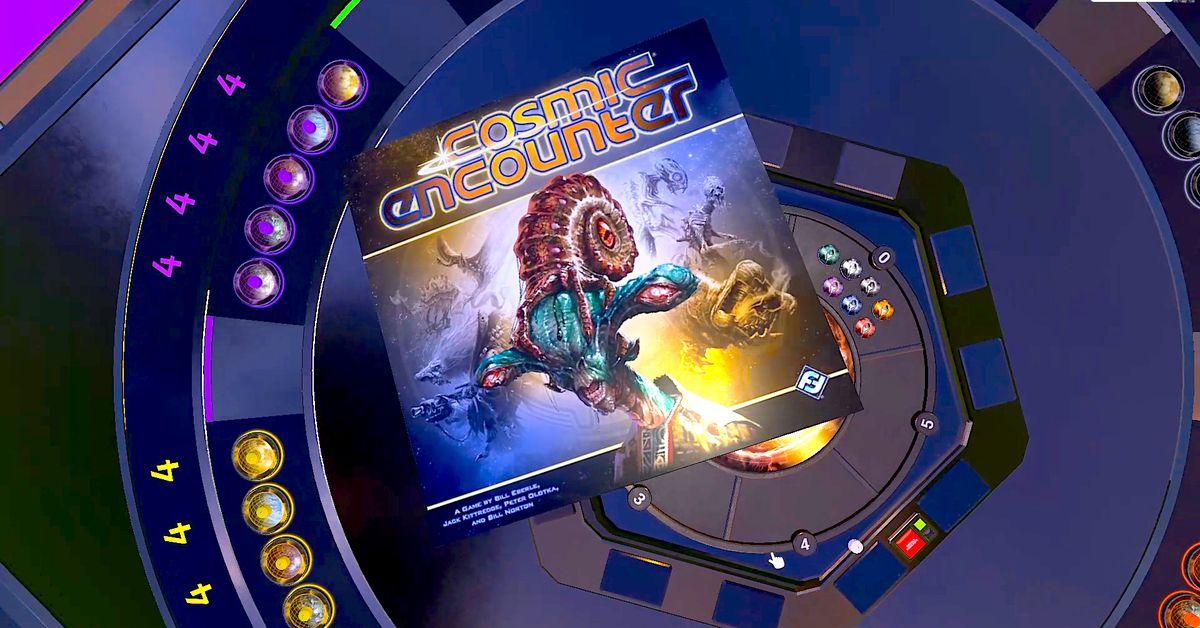