Peacock aims to be a streaming service for uncertain times

Yes, there is a global pandemic going on, but that won't stop the three streaming services from launching this spring. On the heels of mobile-only , NBCUniversal's will start taking flight on April 15 for Xfinity customers, rolling out gradually to Xfinity customers till the end of April, before debuting to the greater public on July 15. Judging by the overwhelming amount of Trolls World Tourcontent in a company presentation on Tuesday, and the emphasis on a fleet of comedic titles, NBCU sees Peacock as the go-to streaming service in this "unique time." "Now more than ever there is a need for a free quality streaming service that can provide viewers with both the information they need to stay informed and entertainment they seek to escape the moment," said Matt Strauss, Chairman of Peacock and NBCUniversal Digital Enterprises in a press statement. "With Peacock, we will deliver many of the best movies and TV shows of our time --- as well as timely news and topical programming --- and do our part to bring people together through the power of entertainment." The Xfinity preview of Peacock won't launch with much new content, but instead concentrate a vast library of titles including episodes of 30 Rock , Parks and Recreatio n, and Frasier (The Office won't be available till later). The new titles coming in this preview period are mostly kid-friendly animated series, such as new episodes of Curious George and all-new series Where's Waldo? and Cleopatra in Space . Peacock Premium, the paid version of Peacock with bonus features such as exclusive next-day access to currently airing shows, will also feature episodes of currently airing series such as Law & Order: SVU , Blindspot , andChicago P.D . To Xfinity customers, ; when Peacock debuts to the general public in July, it will cost $4.99 a month with ads and $9.99 with no ads. Though originally debuting in July to coincide with the Tokyo Olympics, many of the live events NBC counted on for launch have been canceled. Strauss is optimistic about Peacock's success, though, emphasizing the vast library of beloved existing content as viewers seek out content that is "comforting, familiar, and nostalgic." The Peacock interface is designed to evoke a television feel. Clicking the app will immediately begin playing something, much like switching on a television will. Over time, the content playing will become more personalized. Xfinity customers will be able to access Peacock with Xfinity Flex, Xfinity's new streaming device, as well as Xfinity's X1 device. The Premium version of Peacock will also feature channels to curate specific moods and genres, some of which will be clip-based. "We see channels as a sandbox to create even more personalized experiences," said Strauss in a press conference. :no_upscale()/cdn.vox-cdn.com/uploads/chorus_asset/file/19898231/peacock_browse.jpg) Image: NBC 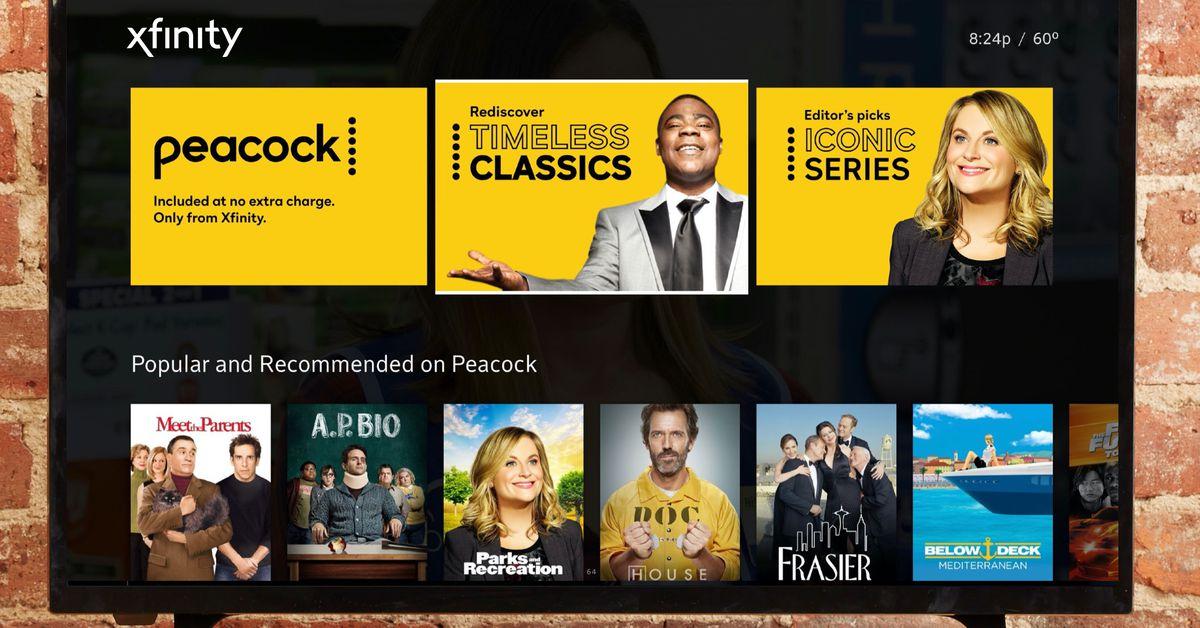