As part of the main campaign in Mount and Blade 2: Bannerlord, you'll have the option of completing the conspiracy quest. Unfortunately, as it's still in early access, this quest is a little buggy and you might encounter a few issues when trying to finish it. As your progress through the Empire questline, you'll be faced with a Conspiracy quest from either Istiana or Arzagos , depending on who you sided with. The latter half of this quest is time-limited, so once you've received it, you'd do well to drop whatever it is you're doing and try your best to complete it. There is a recurring bug where the game will update to say you've failed the quest unexpectedly, so save before you begin anything and frequently during the quest so you can at least try and load back if things go tits up. Mount and Blade 2: Bannerlord -- Conspiracy quest guide A conspiracy bar will fill as you continue with either destroying or unifying the empire and eventually it will update to Stop Conspiracy. You'll now have a limited time to complete the quest but sadly, this is where the story ends for now. You'll be unable to persuade Istiana or Arzagos to make peace with you or go on a mad rampage with your army -- the quest stops dead, maybe because the ending hasn't been added yet. Your choices are essentially limited to letting the conspiracy play out and watching to see if a war happens naturally until more content is added. If you want the Empire to be destroyed, for example, you'll need to have fewer than four imperial-owned settlements across the map, as it means that another power could become dominant. Depending on your income, army size and influence, you might be the top dog or easily surpassed by another power. It also seems like you can't make peace with other powers during this quest, which is equally annoying. I'll be keeping an eye on this quest and hopefully a patch will fix the ending soon, or maybe letting war happen on its own will shed some light. If you run out of time and are feeling lucky, you might want to try You can check our our as well as our guides on how to , , 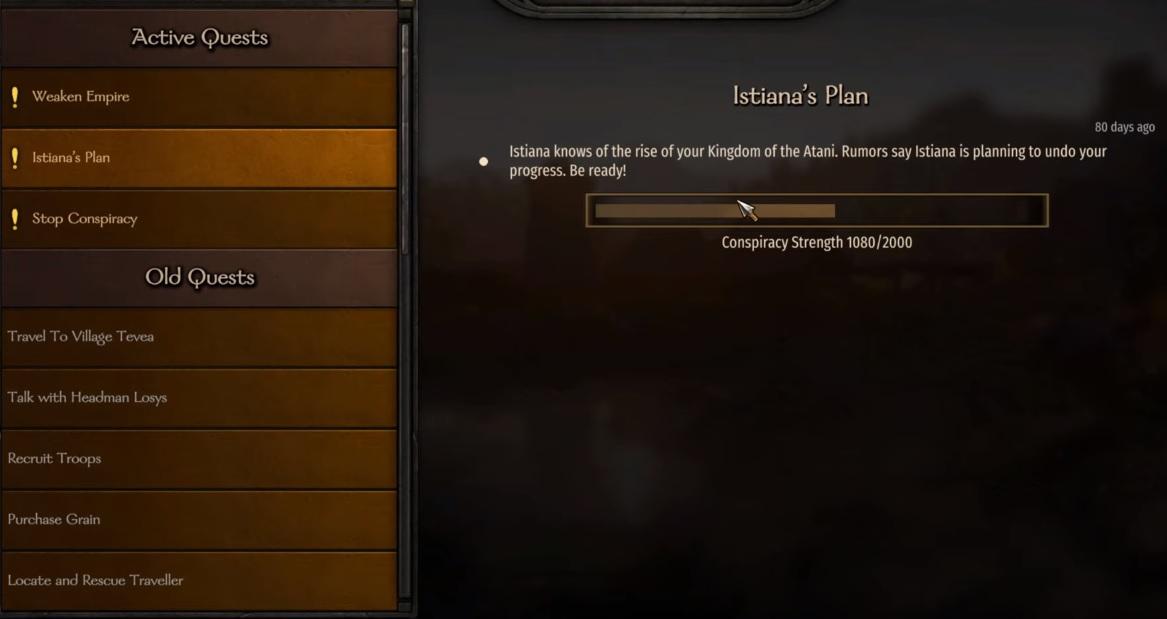