Capcom ahead of the April release of Resident Evil 3 Remake published a detailed interactive map raccoon city , which shows the main places where the protagonists of Resident Evil 2 and 3 appear and all the main locations of the games in the famous fictional city.

All the main events unfolded in 1998.

Jill Valentine's partner, Carlos Oliveira, was the first to arrive in raccoon city. He ended up in the city on September 26, 1998. He was exploring the area near the train station. Two days later, Jill and the biomutant Nemesis showed up in town. On September 29, then-not-very-experienced police officer Leon Scott Kennedy and Claire Redfield from Resident Evil 2 arrived in the city.

Resident Evil 3 Remake comes out in a release on April 3 on the PC, PS4 and Xbox One. The game has already received a demo version. 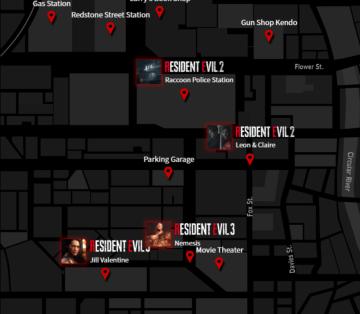