Here's an incredible case of life imitating art: the art in this case being video game PayDay.

Nothing particularly remarkable there. But if you look at the masks, video game fans will see something quite remarkable. It seems our suspects - potentially bank robbers in real life - are fans of co-op bank robbing game PayDay. Here's the original PayDay masks from the first game:

Hilariously, it seems the masks found in the bust are PayDay's "PayCheck" masks - that is, they're from a PayDay community meme that began after unfortunate cosplayers were snapped wearing bootleg PayDay masks. The community ended up creating knock-off names for the masks, and they were dubbed the PayCheck Crew, a kind of crap version of the PayDay Crew who plan rubbish heists and fail to execute them. The meme crossed the desk of PayDay developer Overkill (a part of Swedish company Starbreeze), and, during Christmas 2016 the studio added PayCheck masks into PayDay 2 for a bit of fun.

So, are we looking at the real-life PayCheck Crew here? Given the stash was uncovered by police, perhaps we are.

One former Overkill staff member pointed out the find on Twitter, saying: "I've had people tattoo the Overkill bomb on their persons, and that's a weird experience seeing. But this, this is a whole other level of weirdness. One that genuinely forces you to reflect and consider life choices."

Of course, the suspects may not be PayDay fans at all. They may have just grabbed some random masks off a market stall and that was that. But I prefer to believe there's a group of people out there who fancy themselves the PayCheck Crew - or perhaps they think they look like the PayDay Crew and, like the unfortunate cosplayers who sparked the meme in the first place, got it all a bit wrong. 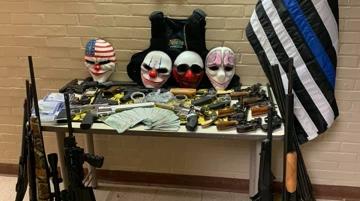