Prime 1 Studiohas announced a detailed action figure of the protagonist of Doom Eternal. Realistic Dumgai will be available in three variations, and their cost ranges from 1799 to 2399 us dollars. Sets will differ in the number of additional weapons and replacement hands. Depending on the configuration, the height of the statuette will be from 92 to 108 cm.

The official name of the toy Dunga from Prime 1 Studio Museum Masterline Ultimate Doom Eternal Doom Slayer. The figure represents the main character in armor, who stands on a pile of skulls and slain demons. The hero's helmet is equipped with LED lighting, he also has a shotgun, chainsaw, machine gun, the legendary BFG and a sword.

Doom Slayer can already be pre-ordered. The company plans to send out the first figures in June-September 2021.

Doom Eternal is scheduled for release on March 20. The game will be released on PC, PlayStation 4 and Xbox One, and will also appear on Nintendo Switch within a year. 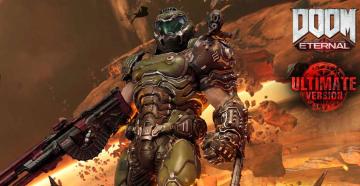