Acclaimed city builder Cities: Skylines is poised to float purposefully into damp new era next Thursday, 26th March, with the arrival of its maritime and transportation focussed Sunset Harbour expansion, releasing simultaneously on consoles and PC.

On the latter front, there's the new Intercity Bus Service, enabling the population to travel between cities via the highway, and there's the eco-friendly Trolleybus Service, drawing electrical power from overhead wires. And for those tired of roads, Sunset Harbour introduces the new Passenger Helicopter service, and recreational flying courtesy of The Aviation Club, which adds to the attractiveness and entertainment of a city. Subscribe to our YouTube channel

Cities: Skylines' Sunset Harbour expansion will be available on PC, Xbox One, and PlayStation 4 when it launches next Thursday, 26th March. 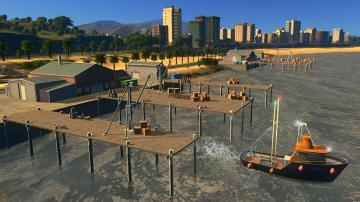