Sabotage Studio, the developer behind 2018's superb era-hopping action-platformer The Messenger, has unveiled its next project, striking retro-inspired RPG Sea of Stars.

Set in the same universe as The Messenger, albeit earlier in the timeline, Sea of Stars tells the "sometimes epic, sometimes silly, and other times emotional" story of two Children of the Solstice as they battle the monstrous creations of evil alchemist The Fleshmancer.

Sabotage aims to deliver a nostalgic but modernised take on the classic RPG formula, blending narrative, turn-based combat, and exploration in a manner "free of irritants and time-sinks". Subscribe to our YouTube channel

Traversal across the gorgeous map (which utilises dynamic lighting for a bit of extra visual oomph) borrows a few tricks from platform games - players can swim, climb, vault, jump off or hoist up ledges - in a bid to offer more freedom than you might ordinarily find in a traditional RPG, while turn-based combat is designed to be more immersive.

Random encounters and transitions to separate battlefields are out, as is grinding, and Sabotage says Sea of Stars' combat will offer "active player input during attack animations (timed hits), multi-character combo attacks, boosting, and strategic defense options to hinder enemies while they are channeling a powerful attack or spell."

Sabotage is aiming to release Sea of Stars on PC and unspecified consoles in 2022, and to help achieve that goal, it's just launched a crowdfunding campaign on Kickstarter. At the time of writing, it's already reached £67,197 of its £78,900 target, with 29 days still to go. 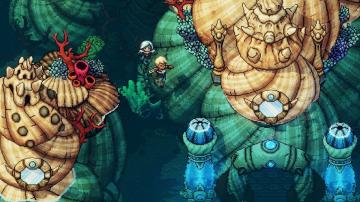