A million movie and TV trailers drop online every week, which can make it hard to keep track of what's actually coming up in theaters and on home screens. To help parse through the endless stream of upcoming movie and TV releases, we've assembled a list of the most exciting (and in some cases, weirdest) trailers that came out this week, along with a hype level rating, tracking whether these particular trailers actually excited us about the upcoming product. Afraid you might have missed something? Fear no more.

This week brings us a new look at Pixar's upcoming Soul , which looks absolutely spectacular, as well as the bizarre Netflix documentary series Tiger King: Murder, Mayhem, and Madness , HBO's creepy The Third Day, and more.

To this day, Channel 4's series Utopia remains one of the best --- if not the best --- TV shows I've ever seen. I've never seen anything so visually distinctive and so impeccably planned out in terms of story. The creative mind behind it, Dennis Kelly, is now bringing us a miniseries from HBO called The Third Day that centers on a mysterious island.

Series release date: May 11 on HBO

Every time Michael Shannon and Shea Whigham are put together, sparks fly. Boardwalk Empire . Take Shelter . Waco . I love them all. They're reunited again in The Quarry, a crime drama that stars Whigham as a fugitive on the run and Shannon as the police chief of the town he ends up in.

Hype level: 10. I cannot be objective. This is hook, line, and sinker for me.

The final trailer for Black Widow brings Natasha Romanoff's old family front and center, though there's obviously tragedy on the horizon given where we know the superhero ends up. In the meanwhile, however, we're glad to see Florence Pugh kicking ass as Yelena Belova.

Movie release date: May 1 in theaters

Hype level: 6. It looks fun, even if the time for Marvel to make a Black Widow movie was a while ago.

The title alone is absolutely wild, but this trailer only gets more bizarre from there. There are loads of big cats, but there's also lots of gold bling, crazy hair, and ... polygamy? Sure! Everything you love about trashy animal shows combined with the high stakes of a murder for-hire plot line.

Hype level:7. It's just so chaotic, I must know more.

Executive produced by President Barack Obama and Michelle Obama, this Sundance-winning documentary follows a hippie-run summer camp in the 1970s for disabled teenagers. For many of them, it was the first time they felt accepted --- and it sparked a fight for disability civil rights.

Movie release date:March 25 in select theaters and on Netflix.

Hype level:9. If Michelle Obama was involved, sign me up.

Is life worth living if you have to die? I dunno, man, I don't want to think about that right now, but I guess I am because this absolutely transcendent trailer. Pixar pushing out of the CG scope? We love to see it.

Hype level: 10. I am fully prepared to sit in a quiet void and contemplate the complex nature of human existence. 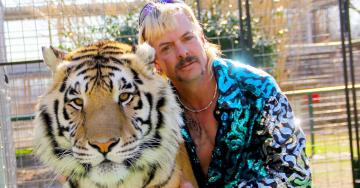