Trailers, man, every week we get plenty. More than we know what to do with 'em. Some are really useful, some are really weird, and the best ones are a bit of both.

So once again, this is a weekly collection of videos we found on the Internet, in our emails, or over social media. They range from a meat-and-potatoes, AAA shooter to a culinary puzzler. Enjoy!

Who: id Software and Bethesda Softworks.

When and Where: March 20 on PlayStation 4, Windows PC, and Xbox One.

Why: Official launch trailers are meant to get you fired up for a game all the way. Mission accomplished. We get a nice pregame motivational speech that sets up Doom Eternal's narrative (yes, it does have a story) and then it's all action and glory kills. There is only one dominant life form in this universe, and it's the one that uses a racked shotgun as a punctuation mark. I'm thinking more semicolon than comma.

Why: If you remember Crazy Climber , an ancient (but good in its time) arcade game, and think it'd be great with some Bionic Commando swinging action, Climbros should be right up your alley. The physics fun doesn't stop there, as teams of climbers can cooperate to fling themselves across the map and solve the puzzle-like levels. Climbrossupports up to four players, and a news release said the Switch version will launch shortly.

When and Where:Now, on Nintendo Switch (a version has been available for iOS and Android since September).

Why (other than, "it rhymes with Nintendo"): Puzzle games need pleasing aesthetics, and Inbento 's milieu involves a cat packing up delicious, visually appealing food in a proper order. We also needed two lighthearted trailers as a chaser for the badassery of Doom Eternalin the lead position.

When and Where: April 28 on PlayStation 4.

Why? Two weeks ago we introduced the western launch of Sakura Wars--- just the second in series history --- as an action-RPG/visual novel/dating simulation. This trailer is all about the latter third of that combo. I have no idea how that voice-lesson minigame with Anastasia Palma is supposed to work. Of course, I have no idea what any of the correct answers to the prompts here are, either. That's because the Flower Division is the demon-fighting tactical unit of a theater troupe. What am I going to talk about with any of them, my job?

Why: Motorsports may be a pet cause of mine, but what really caught my eye was the promise of laser-scanned real-life tracks for this officially licensed game of the FIA's GT World Challenge Europe. That includes six F1 tracks, whose F1 2019 does not feature laser-scanned venues. And it also includes Germany's Nurburgring, a must for any serious driving fan. Assetto Corsa (means "Race Setup" in Italian) Competizione has a very positive reputation on Steam over the 10 months since it launched on PC.

When and Where:Now, PlayStation 4, Windows PC, and Xbox One.

Why:Sniper Elite is my other pet cause, and this spinoff just launched the first chapter, TERROR LAB, in a three-part post-release campaign called Hel--- excuse me, HELL CULT. Sounds friendly!

For those unfamiliar with Zombie Army 4: Dead War, the undead are the safer, occult-caused kind (as opposed to, let's say, a viral pandemic, which has us all on edge). It's a fun way to shoot your way through a couple hours of slobbering, shambling revenants, who still have testicles to be blown off via Sniper Elite's signature slow-mo, X-ray cam. 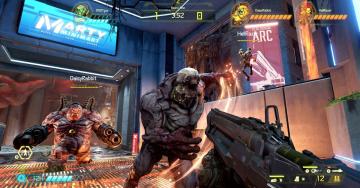