The first room of the first level ofStar Wars Battlefront 2's campaign gives you a helpless, silver, C-3POish protocol droid that you can shock unconscious for laughs if you like. But if you try to do it a second time, it's a one-way ticket to Planet Ass-whoopin', population: you.

This hilare video (hat-tip to Kotaku) went up on the Battlefront subreddit on Friday. Whether a glitch or an Easter egg, it's still awesome, as the droid becomes full-on immortal, whips out a blaster, and starts unloading on poor Iden Versio (who appears to be replaying the first mission here, with some perks enabled).

I'm playing campaign and a protocol droid got a gun after I shocked it and proceeded to eventually kill me. Glitches are weird but hilarious from StarWarsBattlefront

Versio is opening up with a DLT-19 heavy blaster and her Killstreak Vanguard shotgun perk, to absolutely zero effect. Eventually, the droid kills you, says redditor Scorpion5347. This plus their user handle now calls to my mind the indestructible pink scorpion that Serious Sam sent after software pirates, lol.

Some postulate that this could be a glitch, as the nerd-ragin' droid is yelling out with a Rebel soldier's voice. Others think this is deliberate and meant for players to stumble across (indeed, you or others may have already seen this).

One thing is for sure, C3 is PO'd and not taking it anymore. 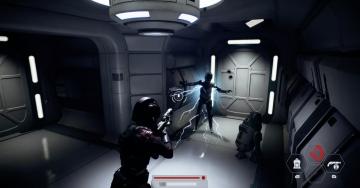