Disney to drop Frozen 2 on Disney Plus this weekend

On Friday afternoon, President Trump declared a national emergency, in response to the coronavirus outbreak that's keeping millions of people on edge and self-quarantined indoors. A few hours later, the Walt Disney Corporation lightened the mood by announcing the surprise streaming release of its 2019 animated blockbuster, Frozen 2. Originally set to join the platform on June 26, the film will now arrive to Disney Plus on Sunday, May 15. Sometimes, it's the little things.

"Frozen 2has captivated audiences around the world through its powerful themes of perseverance and the importance of family, messages that are incredibly relevant during this time, and we are pleased to be able to share this heartwarming story early with our Disney+ subscribers to enjoy at home on any device," said Bob Chapek, chief executive officer of The Walt Disney Company, said in a corporate statement. The press release says the company wanted to surprise families "with some fun and joy during this challenging period."

Last winter, Frozen 2 went on to become the biggest animated movie of all time, earning $1.3 billion around the world. We were a little cool on the movie. From our original review:

Frozen 2 further explores the kingdom of Arendelle, dives deeper into the magic of its world, and raises the stakes for the relationship between Arendelle's orphaned sibling princesses, Anna and Elsa. The emotional swell of the fantasy sequel is up to par with the first, but some of the comedic relief grates on adult sensibilities, and the ending doesn't hit hard. It's all just a little safe.

Frozen 2 has a lot going on. From queer subtext to the Disney fan-theory-debunking plot turns to a existentially curious post-credit scene, it's a movie that transcends the typical animated sequel to be truly epic, for better and worse. But there's one objective truth: Whatever you wind up thinking of the movie, the movie's big single, "Into the Unknown," is a banger. Especially when 10 Elsas get together to sing it.

Frozen fans have been waiting patiently for the movie to hit Disney Plus, and biding their time by watching every movie that's remotely like Frozen. Now that the movie is arriving to the streaming platform, people can finally let go of the anticipation (let it go, if you will) and check the movie out for another time. 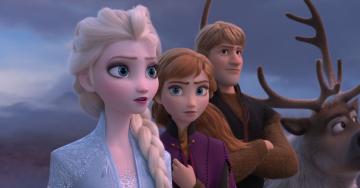